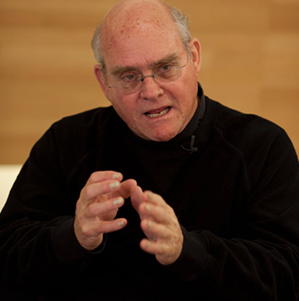 Peter Moore is a creative legend in the athletic footwear industry, with an award winning career spanning over 50 years. He is most well-known for his work with Nike, Air Jordan, and Adidas.  Peter picked up Nike as a client of his design agency in 1977. He formally joined Nike as their first brand Creative Director in 1983. He and his business partner Rob Strasser, launched the Air Jordan brand. Peter designed the Air Jordan 1, widely regarded as one of the most iconic sneakers in the industry. He also designed the Air Jordan brand logos, including the infamous jump man icon which is one of the most recognizable brand icons worldwide. Peter continued his partnership with Strasser and they then went on to found Sport Inc., a design and consulting firm. They were approached by Adidas in 1993 to help revive the brand and compete better with Nike, so Peter and Rob launched Adidas Equipment. As part of this project Peter designed the iconic "mountain" logo which serves as Adidas corporate logo identity now. Peter Moore and Tom Cooke were introduced by a mutual friend in the footwear industry. Tom visited Peter's What'a Ya Think Design Studio in the Pearl District of Portland OR in the winter of 2019 to present the idea for the BLUEVIEW brand. Peter's initial quote was..."I love these kinds of companies because you're trying to do some real good in the world. We need more companies like this!" Further along in the conversation, Peter remarked about the game changing Soleic technology, "this biodegradable foam midsole technology is the last piece of the puzzle in sustainable footwear...it's the holy grail." Peter designed the BLUEVIEW brand logo and icon, and is providing consulting services on brand creative direction, brand strategy, and creative content development.